From the time he was 13 years old, in 1899, until the end of WWII, King spent most of his life at sea. When WWII broke out, King was a 53 years old veteran naval officer. He joined the Royal Canadian Naval Reserve to serve at sea again.

King and his young, inexperienced crew members fought to protect vital supply convoys from being destroyed by German submarines. Commander King was known for his aggressive pursuit in destroying subs, but also for his compassion for stopping, at great risk, to rescue surviving enemy sailors. He fought the machines, not the men. Commander King’s coordinated and determined leadership saved lives and essential goods from destruction at sea. At the end of the war, King settled in the Okanagan, where he was a valued community member, serving on hospital, school, library and church boards in Oliver and Osoyoos.

This exciting exhibition takes a look at submarine warfare, the Battle of the Atlantic, Commander King’s life and the challenges of living and fighting on the open sea: harsh weather, enemy attacks, fragile equipment and living in tight quarters. Discover first-hand accounts of what it’s like to destroy a submarine, peer through a periscope and immerse yourself in life aboard a ship.

The exhibition will be held at the Okanagan Military Museum, 1424 Ellis Street, Kelowna, BC. 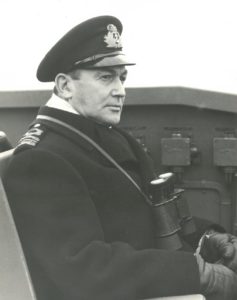